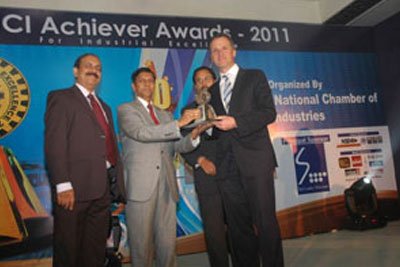 We received the highest number of awards at the Ceylon National Chamber of Industries (CNCI) ‘Achievers of Industrial Excellence’ Awards 2011. A first time applicant, we were the only multinational company to be awarded three top awards in recognition of industrial excellence and contribution towards the progress of market, industry and the nation at large.

We were awarded Silver and Bronze main category awards and were also honoured with a ‘CNCI Top 10’ award as a special award which recognised ten of the country’s leading companies who have made outstanding contributions towards commercial growth and creative thinking.

The ‘Achievers of Industrial Excellence’ Award is held on an annual basis to recognise businesses that have excelled in manufacturing or service and promoted local industrial growth.